Contact was the first film to really take on extra dimensionality in space exploration. It was written by the master Carl Sagan himself so right there you know it’s worth watching. (Also there’s the fact that 2 original Alien cast members are in it) It’s the screenplay however that made me say to myself “Out damnned spot” many times while watching the thing, not the concept nor the cast. 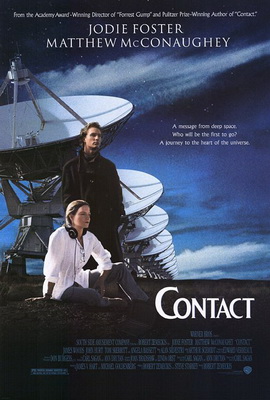 Though the drama side of it is tedious and at times a laborious crawl, the concept and visuals in the last 1/4 make up for that. From space enthusiasts to backyard star gazers, this is a winner you shouldn’t miss.

Jodie Foster would have been an excellent choice as a wife for me. I know, she has married already but I definitely feel a kinship with her. She is amazing in the late seventies show Freaky Friday and I have admired all her work since then. She is amazing in Contact. There are some truly gripping scenes between her and her father that would make a grown man cry (well, they kind of did). If you must know the part, leave a comment and I’ll tell you ;) Speaking of notable moments, the opening of this film could be a powerful short on its own. It travels out into the solar system’s reaches, beyond, and into other systems as recorded by Hubble. It’s really well done. It’s the kind of this you could have on infinite repeat as you’re waiting for guests to arrive at your home party. (scroll down for the video)

This film was Robert Zemeckis’ brain child. After Back to the Future, what can a director do, right? He did Romancing the Stone as Well that burst Kathleen Turner onto the scene. Who, by the way I would accept as a third wife. I hope my wife doesn’t read this, although recently she shared she had a thing for the guys in Peaky Blinders. Well? To each her/his own. Anyone who says Kathleen Turner wasn’t high grade hot in Peggy Sue Got Married might not have a pulse. But I digress …

That leads me to Matthew McConaughey, who I am doing a podcast about this week to be aired soon. He’s great, that’s it. I could complain he tries to be a heart-throb and achieves in being a something else throb but I won’t. He is a priest of sorts in this. A man of the cloth who has lost his way in modern science and astronomy. He is the voice of faith on the main character’s shoulder. Don’t worry, it isn’t done in a packaged, Biblical God sort of way. It’s more an issue of faith. There is a sort of transformation in her as a result of Matthew McConaughey’s character. It was less than moving for me but I imagine Bible thumpers who are somewhat open minded will find it deep and astounding. I on;y say that because that used to be me. I’m more interested in the idea of the space travel and again, the visuals in the last 1/3 of the film. I have yet to see something that terrifying and touching at the same time. AND it’s not really fast, Zemeckis stretches the experience so we can really develop an idea of what it happening.

This is a remarkable film that unfortunately tries a little too hard to be an amazing dramatic piece. I think it could have been half as long if it avoided a lot of that and stuck with the special effects and the theories about “life out there.”

I give it a 7 out of 10 because while great sci-fi, it languishes in misplaced drama writing a good portion of the film.

Instead of a trailer, here’s that opening scene I told you about. Enjoy. Do you think I’m more right or wrong about this film? Please leave me comments with your opinion! This would be a great film to discuss right here!