The indie film Wildlike is a hidden gem from 2015 that was recently added to Netflix. The director, Frank Hall Green, uses the Alaskan wilderness as backdrop for a suspenseful story. Starring in Wildlike are Bruce Greenwood (Star Trek) and Ella Purnell (Maleficent) who make this film a unique diamond in the rough. 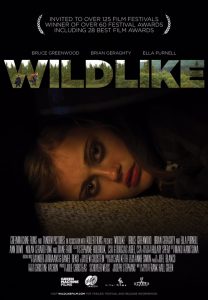 Ella Purnell stars as Mackenzie, a 14 year old girl who’s been abandoned by her drug addicted mother. While in the care of her uncle, she is sexually abused, and flees to a nearby Alaskan hiking trail. That’s where she crosses path with Bruce Greenwood’s character, Rene.

Bruce Greenwood is the most recognizable star in the movie and he does a magnificent job trying to understand and help the troubled teen. He’s been in films as big as Star Trek and thankfully for us fans he accepted this role even though it was an independent film. The friendship between Mackenzie and Rene is fascinating and appears it could save her. Watching it develop is one of the best parts of the film though so I won’t describe it more than that.

Mackenzie is an interesting and powerful character as well. Not many of us know what it would be like as a 14 year old girl who was sexually molested. Some will say she should have told the police but others could argue the police might 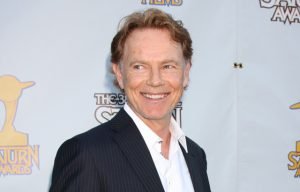 believe the aggressor, making a return to him inevitable. Ella Purnell dons the signature troubled-teen mascara that we see gradually reduced through the film as she begins to trust Rene. She shows us the fear involved for victims. She is a survivor and sticks close to him. Rene has profound reasons for being on the trail as well. The trail could be a metaphor that we all have our own pain to walk off. Both actors do a great job in their hiking dialog.

The suspense starts in the form of a bear on the trail and then culminates with the abusive uncle stalking Mackenzie. When Rene and the uncle finally meet, some may hope the uncle gets beaten to a pulp. They don’t show that. Instead, as with other themes in the movie, they infer it and the viewer is left to decide for her/himself. 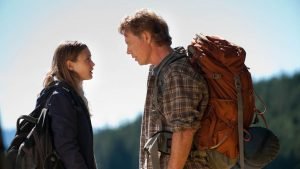 This film has done quite well for its first time director, Frank Hall Green. It has been invited to over 75 film festivals and has won 16 Best Film awards. It’s nice to see such an understated film that allows the viewer to come to her/his own conclusions has done so well. It’s also understated and tasteful in the way that ordinarily graphic scenes like the sexual abuse is not shown but rather inferred. This is a stylistic choice of Green. By way of trivia, the IMDB page for the movie states that Frank Hall Green hiked in the exact park where the wilderness scenes were filmed and the path in the film was based on paths he and his family hiked.
I found this film a pleasant surprise. I expected a sleepy hiking film and instead got amazing outdoor cinematography with a suspenseful/thriller. I love movies that juxtapose a good story with stellar visuals. I’m reminded of Fargo as an example. Frank Hall Green is already at work on other projects but I hope a lot of people get a chance to enjoy Wildlike.

2 thoughts on “‘Wildlike’ – A Sleepy Hiking Film of Surprising Suspense”