When you see John Wayne and Glen Campbell starring in a film from 1969, you know you’re getting a film with true grit! That’s the theme here. The teenage girl wants a man with it to track down and kill her father’s murderer. This film is an unchallenged classic loved for 4 decades by western lovers worldwide. 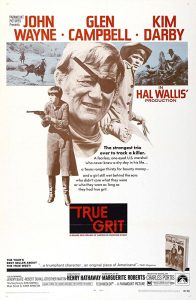 The director here, Henry Hathaway, is noted for his 67 films he directed. When do we see that sort of accomplishment in today’s directors? Judging by the titles ie; “The Shoot Out” etc., He knew the western genre well.

The appeal for this film for me is in it’s simplicity. Rooster Cogburn (Wayne) is a bad-ass and that’s why the girl wants to seek him out. You contrast her youth and innocence on the trail with his and you have a vibrant show of shootouts and shenanigans. Glen Campbell is at his best in this also. Furthermore I like old westerns like this because they give you a chance to digest things. Many modern ones fill the space with over violence and they aren’t as enjoyable.