This is a really cool tv series on HBO. The executive producers are stars in the first series: Matthew McConaughey and Woody Harrelson. They are famous dudes who had a common vision. They present the “real” side of detective work, the kind that takes its toll on the cops doing it. 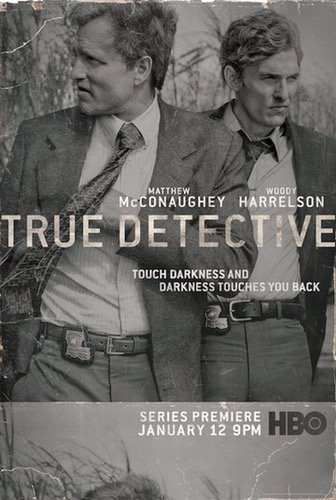 Though it starts rather slow, once you get the idea that they’re flashing back to what has happened, the slow interviews make sense.

Two detectives are on the prowl for a killer who is obsessed with the occult. There is a matter of leaving antlers on a naked woman who’s been killed in a sacrificial way. This image permeates the entire first season, which is the ony one I have yet seen.

As the cops slowly deteriorate as individuals, they continue chasing down this killer, even after a decade and more go by. One detective has lost his wife and child to a murderer, another likes to cheat on his wife “for the good of his family.” He claims the job requires it since He gets so depressed from chasing murder all day. Hmm.

The last episode is great. We finally get some closure but that doesn’t really feel like completion. I’m looking forward to watching the next season which will feature Vince Vaughn and Colin Farrell. In conclusion, I recommend this HBO show for a binge watch or otherwise because it’s really well scripted, filmed, and overall well-made. If you can get through the first three episodes and get hooked, you’ll be addicted to the end.