I’d been waiting for this film to come into theaters and once again: we have a Netflix movie that never made it there. Is that bad? This is the first real horror film of 2018 and it certainly watches like one. Unlike some movies that have come down the pike in a forest that really weren’t horror like “The Witch” and “It Comes at Night,” this one has the elements of a horror and delivers as such. 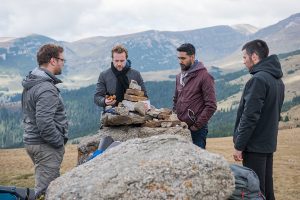 The director is David Bruckner, known for “V/H/S,” “Southbound,” and “The Signal.” Looking at these titles makes me realize he has a solid background in horror and “The Ritual” is his foray into the big time. This one will probably be enjoyed by more than the others. It’s an “on location” piece meaning it is filmed in the woods. This must have proved challenging. I found some pparts of it to be a little misguided but as a whole, this is a directorial accomplishment.

There is a house the hikers happen upon in the film. Upstairs there is an odd piece of ritual like art. It looks rustic and religious in form. I found not much was explained there and it never really added up for me what was happening there. It was if it was just being blamed on the supernatural when the scenes could have held better clues.

Other than the house scene, the film develops well throughout. The ending is a massive crescendo and it’s nothing you’d expected up to that point. By saying less, he says more. By suggesting the size and shape of creatures, he makes them all that more scary. Because it’s supernatural, we can’t really argue logic here which is good for the director because it’s lacking a bit there. Having said that, I found this horror film scary and full of suspense. There are many roads to Rome and this one definitely finds its way there. I give it a 8/10