When this animated film was released, it appeared in the ads to be similar in its stop action and quirky appearance to some of its predecessors like: Wallace and Gromit, Flushed Away, and Chicken Run. It certainly piqued my interest with its mega marketing campaign. 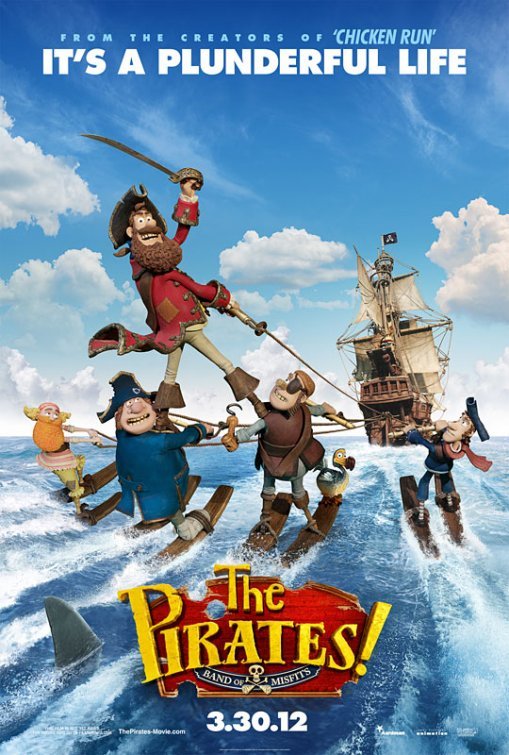 The Pirates! Band of Misfits

“Pirate Captain sets out on a mission to defeat his rivals Black Bellamy and Cutlass Liz for the Pirate of the year Award. The quest takes Captain and his crew from the shores of Blood Island to the foggy streets of Victorian London.” -IMDB

I must have seen the trailer 100 times both in theaters and on the web. The Pirates! Band of Misfits was directed by Peter Lord and Jeff Newitt who are the masterminds behind Aardman Animations which is known by some to be one of the most prestigious animation companies in the world. One thing that sets them apart in my view is that they produce stop animation where the camera must be stopped intermittently and the figures are moved millions of times to create the animation.The biggest voice actors are Hugh Grant as The Pirate Captain, Martin Freeman as The Pirate with a Scarf, Imelda Staunton as a ruthless Queen Victoria, David Tennant as Charles Darwin, Jeremy Piven as Black Bellamy, and Salma Hayek as Cutlass Liz. It is most definitely a quirky work with little inside (often hidden) jokes throughout. For example, when Peg Leg Hastings says “lock up your daughters” it’s a reference to a Slade song. But you wouldn’t get that if you were a kid right? I know mine didn’t get it. It’s too bad that much of the humor of The Pirates! Band of Misfits is lost on kids.

Original and quirky, but over kids’ heads is how I would describe this movie in a sentence. For that reason, I’d only recommend it for Aardman enthusiasts and not optimal entertainment for kids 13 and under. Mine were bored most the way through.

The story is about Pirate Captain who is seeking to be “Pirate of the Year.” Through a disjointed and often unexplained chain of events, he comes into contact with the historical figure Charles Darwin. Darwin is taken aback by Captain Pirate’s dodo bird and convinces him to come to London with the bird to present it at a science convention. From there, Queen Victoria gets involved who hates pirates and loves to eat endangered or exotic animals. Confused yet? Well, like most animated movies, there is a happy ending where everything gets wrapped up in a pretty bow. For me, the metaphorical beauty was the end credits. Watching my kids yawn, ages 13, 7, and 5, was far too contagious for I myself to fend off.

FINAL THOUGHTS
The Pirates! Band of Misfits is a visually stunning film. The filmmakers have my respect for their compelling stop action animation. Unfortunately the story is not engaging and lacks side-splitting humor like, for example, that of the slugs in Flushed Away. Still, lovers of the animation style will enjoy it. It’s not the best Aardman feature but it’s not a bomb either. I hope the next one considers the kids a little more because I will certainly want to see what Aardman does next.