Everybody knows the Godfather right? Well, that isn’t necessarily true. I think people about my age take it for granted as an amazing classic. We assume all movie fans have it memorized. I know my podcast cohort isn’t fond of it. As strange as that sounds, I must accept it is true. I’ll tell you what appeals to me about it. 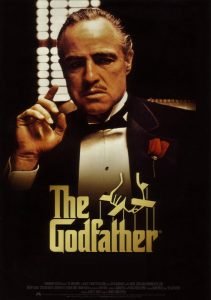 There’s something powerful about Don Corleone. He’s amassed wealth and an empire entire outside of society’s machine. He has become a new machine. He does “favors,” usually entailing crimes, for the butcher, the baker, and the candle-stick maker. Then they owe their allegiance to him and his family mafia. What we see in the film is a powerful crime family made up of those people, built one by one.

There is a bunch of violence but it’s righteous. You get me, I get you back. That’s how it works in the mafia. This film changed the world and especially changed movies. The way things are done now is warped in a twisted and beautiful way little bit because of the Godfather. I recommend this film to people who can take righteous violence and who enjoy amazing period pieces with thick character development. Also, who can miss the best of Marlon Brando?