Orbiting a planet on the brink of war, scientists test a device to solve an energy crisis, and end up face-to-face with a dark alternate reality. An arm getting amputated futuristically with no blood is cool. Even making the setting of the third installment of the Cloverfield franchise in outer space is cool. BUT, If you haven’t got a great story and techniques that keep the viewer’s interest, that stuff is side-stuff. Also, ask yourself this: what is the continuity between these three films? Aliens? Cloverfield as a name? I would say nothing but marketing. Could it be they tried to dupe us? 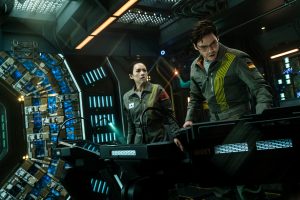 JJ Abrams has been around the block. Most stuff he directed I like but not “Super 8.” He’s in the the producer seat here and I would rather watch Super 8 than “The Cloverfield Paradox.” The Director is Julius Onah. I can tell you he’s directed at least 4 movies looking at his bio. The only one I have seen is this one.

Unfortunately, there is no special identity for these films, apart from having “Cloverfield” in their title. More time should have been spent figuring out that special sauce.

Were there some cool effects? Yep. Did we see actresses cry on cue? Yep. Was it boring? Yep. Did it remind this author of the vanilla and blah film “Life” in almost every visual way? Yep yep. I gave you two yeps there, interpret amongst yourselves. RE: special effects, my favorite one was when the soldier lady broke through the shattering glass of the spaceship and was jettisoned into space. Pure awesomeness. I appreciate the racial leap of victory this director and cast represents. Nothing can take that away. Nonetheless, it’s a bad story here that made everyone look at their watches far too often. Will there be a Cloverfield 4? I sadly have to give this one a 5/10

One thought on “The Cloverfield Paradox”