This thriller moves a bit slow but builds the suspense until you get the point like a tidal wave: War is hell whether “in theater” or via joystick. 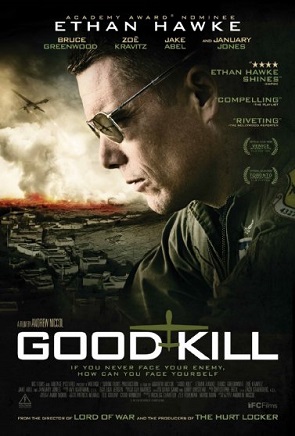 Writer/Director Andrew Niccol has an impressive resume: 2014 Good Kill, 1998 The Truman Show, 1997 Gattaca, and more. Good Kill is just the latest impressive project he’s done. It deals with the individual conscience amidst a system that goes against it.

Major Thomas Egan, Ethan Hawke, is a grounded pilot. He has become part of a secretive force that controls drones in Afghanistan by controls resembling that of an XBox. He is stationed in Las Vegas and goes to kill every day in a portable room of sorts where the remote equipment is kept. There are many rooms like this. In fact, Egan is not alone in his daily kills. He has a team with him.

In charge of Egan’s team is Lt. Colonel Jack Johns (Bruce Greenwood). Being a huge fan of his, I was glad to see him in this role. I liked the character because he wore his heart on his sleeve. He shared his difficulties with the drone kills they were doing. Still, he never breached his orders and did what he was told from his commander.

Egan starts regretting what he has to do every day. He begs the Colonel to put him back in the plane but that seems like it will never happen. Egan starts seeing rape and murder happening and he is told to stick to the orders. He is told the rapist “is a bad man but not their bad man.” He is ordered to let him be.

Events like this and others like collateral damage he witnesses cause profound strain on Egan. He starts drinking and neglecting his wife and kids. From there we starts to see him crumble and we learn through his story what this sort of remote warfare can do to an individual.

This film is done very well. The obvious comparisons to XBox games like Call of Duty are there but it’s more about real war I think. How many of theirs do we have to kill until they stop killing us? Is this sort of warfare that is going on now in real life actually protecting us from terrorism? So many questions like these are raised in this film. I would have liked it if they gave more background on his type of warfare and showed the connection to video games. It was alluded to that there is a connection but seeing that as part of the story would have sent a stronger message to the young men and women out there who get vehemently into these games. Because that connection was not explored much, it lost a star for me. I still think this is one of the better films of 2014, I recommend it.