I’m fascinated when I watch biographies of serial killers and discover they had some very normal characteristics. It’s in those normal places this film finds its strength. Could a kidnapped victim become like a son to a serial killer? Would that victim choose to follow in the killer’s footsteps? 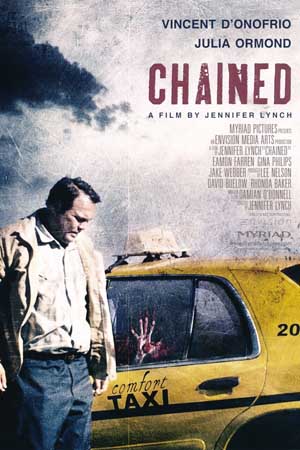 If there were a book on serial killing and how to do it, Bob (Vincent D’Onofrio) could have written it. He has a perfect routine for killing. Bob goes about as a Taxi driver, picking up women and then taking them back to his secluded home to kill them. It’s an ingenious method because who could track a person to a Taxi? Beyond that, how could you question all the taxi cabbies in a high traffic area? It would be like picking a needle from a haystack. Bob’s domicile is also perfected for his occupation. There is no way out for his victims once they are inside. Only Bob has control of who gets at, and of course, since he’s a serial killer, no one gets out.

So what’s missing for a guy like Bob. Whether he realizes it or not, he needs a helper or a slave to help him clean up after his kills. That’s where Tim comes in. Tim’s father arranges for he and his mother to get a taxi home from the movies one day. There is an element of premeditated evil in this on the part of Tim’s father which is revealed later. Bob picks them up, kills Tim’s mom in the usual way and keeps Tim on a chain, treating him like a slave and animal until he is 17-18 years old, Tim cultivates a deep enmity for Bob and we see it play out toward the end of the film. The end is somewhat satisfying though I would have preferred the sideline of studying books on medicine and anatomy to play a larger role as the vengeance scenes unfurl. I kept wondering how Tim might use his knowledge of medicine from books to take out Bob. It can be argued it does but I expected something more intricate and satisfying.

The psychology of an abducted prisoner is always interesting. In this case, Tim is on a chain, he cannot eat without permission, and what’s more he cannot eat anything other than what Bob leaves on his plate. After years of this, the actor playing an older Tim (Eamon Farren), has dark eyes, an emaciated figure, and deep-seated hatred for Bob. My favorite scene in the film is the featured image above. Tim hovers above a sleeping Bob like a crouching demon. It’s a quite scary scene. Jennifer Lynch did an amazing job as director. She is not a horror director per se but she has a bit on her resume. One of note was an episode of “Damien.” Ha! Scary, symbolic name is it not? 😉 I’ve always liked it.

I liked this film. There isn’t as much gore as the subject matter suggests. I saw it as a psychological thriller with some horror elements, the above described scene being one of the few horror scares. D’Onofrio gives a solid performance. I saw parts of famous serial killers: Ted Bundy, for example, used to pick up girls and lure them back to him home to kill them. It’s an interesting study of confinement and being held for years against ones will. We live in a world where people threaten so much. “I’m going to sue you!” etc. People rarely make good on threats like “I’m going to kill you.” or “I’m going to make you my house slave on a chain and call you rabbit.” I kept thinking Tim would escape but the years went by and alas, he didn’t. The ending is as much exciting as it is good writing. The question is though, after a film like this, can vengeance be exacted when so much abuse and harm has taken place? This film is better classified as a study in human behavior and how it reacts in the face of evil. Because Tim’s study of anatomy and medicine from Bob’s books was not used cleverly enough, it lost a star with me. In conclusion, this subject matter is not for everyone. Having said that, for fans of the horror, thriller, and criminal psychology genres, I highly recommend it.