Mostly I was struck by the deadpan comedy of this show. Watching Rachel Bloom play this goofy, cute character with such total investment is a laugh a minute. Before too long, I could see it was a periodic musical. I usually don’t like those unless they have amazing tunes. The tunes here are good but the humor is what holds it all together and makes it a behemoth. 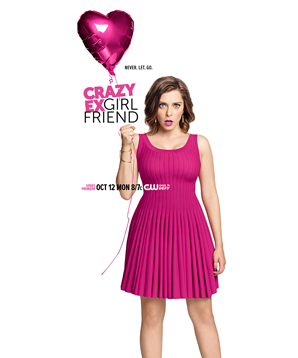 I always run to my blog when I find a great new show to binge watch. Today it’s Crazy Ex Girlfriend streaming on Netflix. This is not a spoilers review but rather a preview. Rachel Bloom is tons of fun to watch for both myself and my wife so I know she’ll appeal to may viewers. Her self-deprecating humor makes the show entertaining but the music and sketch sets make it a wondrous journey to and from the insanity of love.

In the series, Rebecca Bunch leaves her posh, successful law practice to follow a high school crush (Josh played by Vincent Rodriguez III) to West Covina California where she takes a lesser paying job. She is okay with his because her over-reaching goal is to win the heart of Josh! Meanwhile, she develops a platonic relationship with Josh’s best friend Greg, played by Santino Fontana.

I am sure as the episodes play out we will see a love triangle between Greg, Josh, and Rebecca. She’ll be back and forth a hundred times between the two. This is predictable but always fun when there’s good solid comedy and music in the mix! And not just music, but self-effacing music the lead girls sings and dances to. It’s a riot, Rachel Bloom is a delight and highly entertaining. At time of writing this, the first season is streaming on Netflix. My wife and I are looking forward to binge watching the rest of the first season and then checking out the show as new episodes unfold.