My score: 10/10. This is mostly a tale based on a true story that shows the individual challenge after the bombing at the Boston Marathon. Movies about tragedies often concentrate on the upswell of motivation for a city, like Boston or New York, and how the citizens banded together, as in 911, to become strong and able to defeat the enemy or criminal that caused the problem. This one is less like that and more like shining a light on one victim and his rugged path to survive. 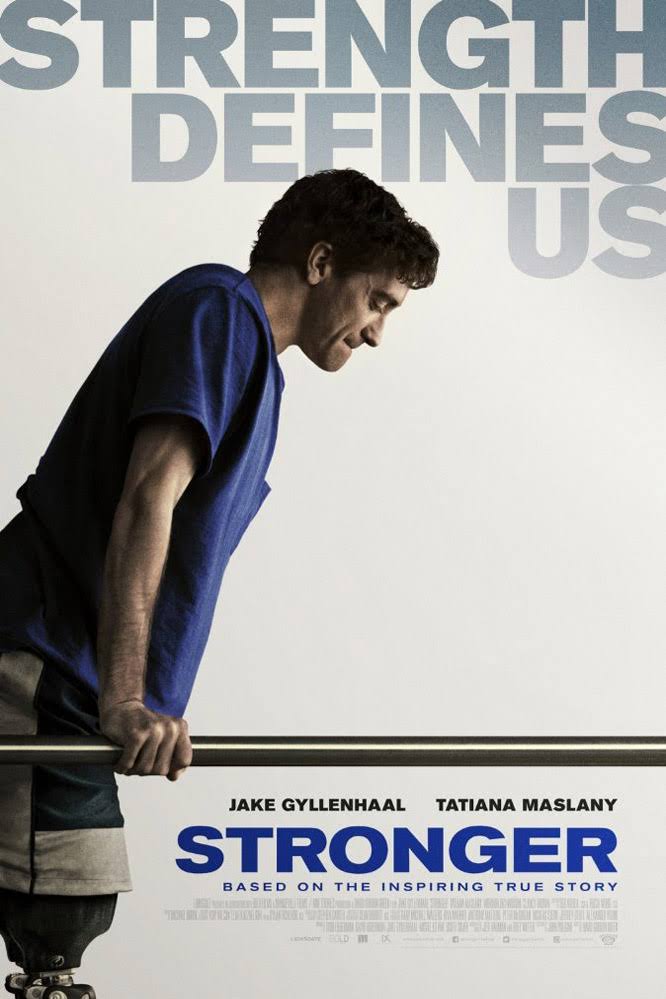 Stronger is the inspiring real life story of Jeff Bauman, an ordinary man who captured the hearts of his city and the world to become a symbol of hope after surviving the 2013 Boston Marathon bombing.
Director: David Gordon Green
Writers: John Pollono (screenplay by), Jeff Bauman (based on the book “Stronger” by) | 1 more credit »
Stars: Jake Gyllenhaal, Tatiana Maslany, Miranda Richardson

Our director here is David Gordon Green who has directed different sorts of films. “Prince Avalanche” starring Paul Rudd is one example. His films tend to focus o the individual more than the big picture. He really threw a swoosh with this one in my opinion. One aspect of the film is to show the inherent selfishness in some slogans and corporeal recovery campaigns. How good is it to be “Boston Strong” when you have no legs? These are simply alternative ideas that come up, they aren’t preached at all.

The crux of this story is the relationship between Jake Gyllenhaal’s character and Tatiana Maslay’s. The were an on-again off-again couple when Jake’s character tried rekindling their relationship. This happened a few days before the bombing. Her main gripe with him wa sthat he “never shows up for anything.” She halfway-jokingly says, if he wants to be with her he can start by “showing up at the finish line” of the Boston Marathon she has trained to run.

As a result of him showing up, he randomly happens to be standing in a place where the bomb blows his legs off. Without getting into too much detail, the movie is his journey from that point. This is a great film as a relationship study as well as a study in recovery from profound, violent trauma. I greatly enjoyed this film and gave it a 10/10.