Since this is my first Bond Films experience, I decided to not get to big for my breeches. I picked three high points and that’s what I’ll share with you. There is a LOT that makes this film work but I’ll save the advanced stuff for the experts in this franchise. 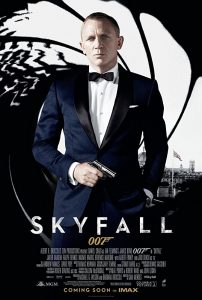 Bond’s loyalty to M is tested when her past comes back to haunt her. When MI6 comes under attack, 007 must track down and destroy the threat, no matter how personal the cost.
Director: Sam Mendes
Writers: Neal Purvis, Robert Wade | 2 more credits »
Stars: Daniel Craig, Javier Bardem, Naomie Harris

But before my 3 things: The director gets a nod: Sam Mendes. Here’s a list of what the guy has done:

I haven’t yet seen Spectre but know a little about it. I am looking forward to it. Revolutionary Road is a hard watch and definitely gives couples something to think about. Kate Winslet was married to the director at that time. They have since divorced. There is no such impressive acting in most action films and this Bond film doesn’t have it probably by design but that’s okay. The Road to Perdition and American Beauty are also character and dialog driven films, unlike this Bond film. So, how has the director made this film “work” for so many people it’s first on the majority of lists ranking the franchise? Here are three memorable components I noticed, again as I said, there are many more.

The views over and in Shanghai are breathtaking cinematography. Instead of focusing only on the action, Mendes envisioned so much more for this film. I felt like the armchair traveler reading and SEEING what he is reading on the other side of the world. One might see the film in this movie as a cheap vacation idea. It really took me away and drew me into what Bond was up to.

The villain played by Javier Bardem was scary and abrasive. I really wanted Bond to kick his ass. As the film continued though, I could empathize with him. He is not altogether a bad guy. Still, he had to be dealt with in the plot of the story. The parts where he removed his teeth were chilling and worked so well.

The Bond girls were all mysterious and sexy, which I’ll bet is true in all the films. They are also scary and NOT SOFT. In so many films the villainesses persuade the protagonist to stray from his task but nit here. This Bond has been around the block. It fun to watch the Bond girls in this film even while they are cold as ice beneath their beauty.

There are my three mentions about this film. I truly liked it and will definitely continue to the next in the series. I have a body horror podcast to do tomorrow so I will be reviewing films for that but I am sure next week you’ll be hearing from me on this blog about my next Bond film pick and review. If you have a second, why not leave me a recommendation. This one was tops! 10/10.