This was a post I did for Darren and Movierob‘s blogathon a couple years ago. You might say it was when I started getting serious about reviewing films on my blog.

People in their teens and twenties might find it hard to believe that there were werewolf movies prior to “Twilight.” Probably the most outlandish of which is “An American Werewolf in London.”

This post was my entry to a Halloween “Kingathon” blog challenge, published first there. 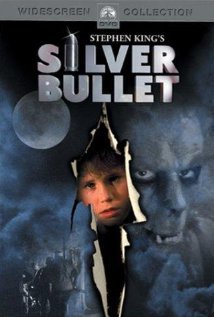 If you’re a horror fan who hasn’t seen it yet, you should. It’s comedic irony in a horror film like no other film. “Silver Bullet” is another werewolf film that has been lost on a new generation. I was 10 in 1980 and watched whatever I could of Stephen king movies all through the decade. “Silver Bullet” is horror with an Americana feel to it. King created a solid story here that has stood the test of time for me. Watching it 30 years later, I still hid my eyes a few times, remember terrified sleepovers of my youth in front of the tv.

The plot is fairly simple but that works well for the film. A werewolf brings terror down on a smalltown American city. The protagonist is Marty, a paralyzed boy confined to a wheelchair. The other two main characters beside Marty are his sister and uncle. They don’t believe what he is telling them about the horror he sees. Along the way you get smalltown diners, 80’s decorated homes, picnics, and scary legends coming to life before your eyes. All people around my age must remember the motorcycle wheelchair. Yes, that was something to behold! Most all of King’s movies have somewhat of a sing song vibe to them, “The Shining” being an exception. I remember reading “The Stand” and “Firestarter” in high school and there were pages devoted to oldies tunes. King has a talent for making singsong wholesome images terrifying. Silver Bullet follows right along in that style of his.

A character worth noting is Marty’s uncle, played by the indefatigable Gary Busey. He is pure fun to watch on screen. When I see him in movies like this or “the Buddy Holly Story” I can’t help but wonder if the character was written just for him. He has an attitude in real life that shows through in most of his characters. When facing a werewolf, you definitely want Busey with you. In the interest of preventing spoilers I won’t go into too much plot detail. Suffice it to say, “Silver Bullet” is a well-crafted movie adapted from an amazing story by an established and world famous horror writer. It reminds me of the 80’s in its purity and innocence. Even though it is a bit singsong at times with its focus on an American town, it pulls no punches for being a frightening movie including clever effects. Every time I watch it I see something more. The werewolf movie genre may have evolved since the 80’s but we can always travel back and get a glimpse of what it was with “Silver Bullet.”