IMDB’s number one movie shouldn’t be fucked with right? Well, it has its imperfections. The reason they picked Tim Robbins will always be a mystery to me. All the other casting is good. It’s an inspired Stephen King novel and that’s why it’s good (and the only reason why), in my opinion. 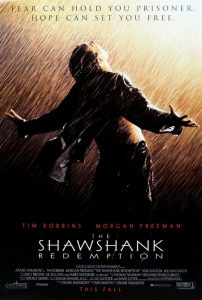 Most people who see this film have a visceral reaction. It’s not boring in any way. I like prison films and this is sort of a sing-song one. Still, it’s a great prison film and I like it a lot.

You get to see what happens on the inside from a kinder, gentler, machine gun lens. Part of that is due to Stephen King. You know, he is very tame compared to some of the other horror writers. There is a bent in a lot of his stuff against traditional religion. I can definitely relate with that bent.

There is also a lot of Murphy’s Law. I probably don’t need to recommend this since it’s done quite well for decades on its own. Still, I recommend it to fans of prison movies and Stephen King’s outlook on things. Beware of a sing-song nature. This isn’t the hard, deep stuff of life as it claims to be.