The lives of three young women and why they became punk revolutionaries is the main idea of “Pussy Riot: a Punk Prayer.” 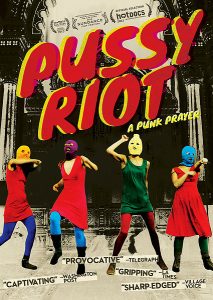 It’s a real situation and a real “group” (instead of a band) that protests the Soviet Union through punk songs and performance art. They claim to be non-violent, which is good. In some of their protest situations they have been threatened and violence has been enacted against them. Three visionaries of the group: Mariya Alyokhina, Yekaterina Samutsevich, Nadezhda Tolokonnikova occupy the film’s content and their stories are inspiring or enraging depending on your political and moral point of view. I found these three women and their art hugely inspirational. I think we forget in America what freedom is and that at some point, it needs to be sacrificed for.

These three women feel that Russia needs to get more progressive. By that I mean, women should be allowed to have a life with or without men.

They also feel there should be a clear separation between church and state. More than anything, they detest the policies of Vladimir Putin, the current leader of the Soviet Union. Many of their songs decry his regime. I liked the open and forward thinking of the women but some of their techniques, such as the naming of their group and some past indiscretions on film, in my opinion are not as universally embraceable as they could be. I’m writing a review about their documentary but I cringe a little creating the title with the word “pussy” in it. Is there another way we could name this group without fanning the flames of the conservatives? I am no revolutionary but I might recommend to Pussy Riot a slightly more marketable and palatable approach to its persona.

These women spend at least 6 months in jail (I lost track after all the updates and frankly am too lazy to look up this significant particular). When they address the court or the press, it is breathtaking. They scribble tomes while behind bars and nearly every time they read their words, they are met with unguarded applause. These is something to these revolutionaries but the movie feels at times as if much of it is staged. If not staged, the movie sometimes feels like HBO camera crews are betting on a worldwide interest in a documentary. This to me is gauche. Not everything can be captured in a documentary. Would Johnny Rotten want to be followed by HBO? How about Ghandi? Hmmm, maybe? Having said that, this movie reminds me of the times I fought to be outside the “system.” So many people these days, especially our youth, accept their position playing video games and being bored. We don’t have to accept the role society gives us. We can break out and be original. It could start by protesting the things we dislike in society. I wonder if many American kids would risk going to jail to try and make the government change. Let’s hope more American kids get that message from Pussy Riot.