The presenting room is full of women in white nurse-like dresses holding pins and needles with measuring tape. Like in a hospital they are waiting fearfully for the designer to enter the room. That designer is Reynolds Woodcock, the year is 1950 in London. He is the surgeon, they only wait on him to perform their secondary duties. Though he is renowned, perhaps Mr. Woodcock is a bit too fastidious for this earth, for his own sanity. 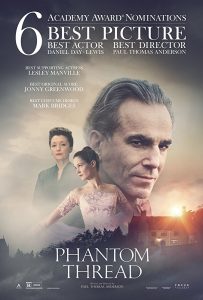 Paul Thomas Anderson showed us with “The Master” and “Inherent Vice” that he was a strident, intense filmmaker who has a vision for the story. “Phantom Thread” keeps with that showing us the mind of a celebrated dressmaker is is probably mildly mentally ill. We are shown right away he is not a sprightly aged man. We are shown soon after he must have thigs his way. One example is how he only likes asparagus prepared with oil, not butter.

The film is lovely yet dismal throughout, like a sweet and sour sucker. To be married to him you must be at his whim and understand his moods. It hardly seems worth it and yet his child-bride played by Vicky Krieps but she accepts the calling. The two have romantic and tense fighting times, sometimes with words, others in silence. Incidentally these times are the best for learning out who this couple is as individuals.

Ultimately, the music and gifted performances in this film are why it has been nominated for an Academy Award for Best Picture. It’s not a hip or “chic” topic and I feel many people will be turned off by the slow cadence of it all. It’s a film that draws you in though, gives you an experience and then lets you draw your own conclusions. It is elegant but some may find it doesn’t have enough of a point (no pun intended). I give this film an 8/10.