My Rating: 10/10 – I can’t think of anything wrong with this film, it’s one of the perfect ones in my book. Read my review or listen to it at the player below. Recording is an episode from my podcast.

About 25 years out of high school, everyone probably thinks a little about what they could have or should have done. This film throws a little sci fi “what-if” into a 25 year high school reunion. 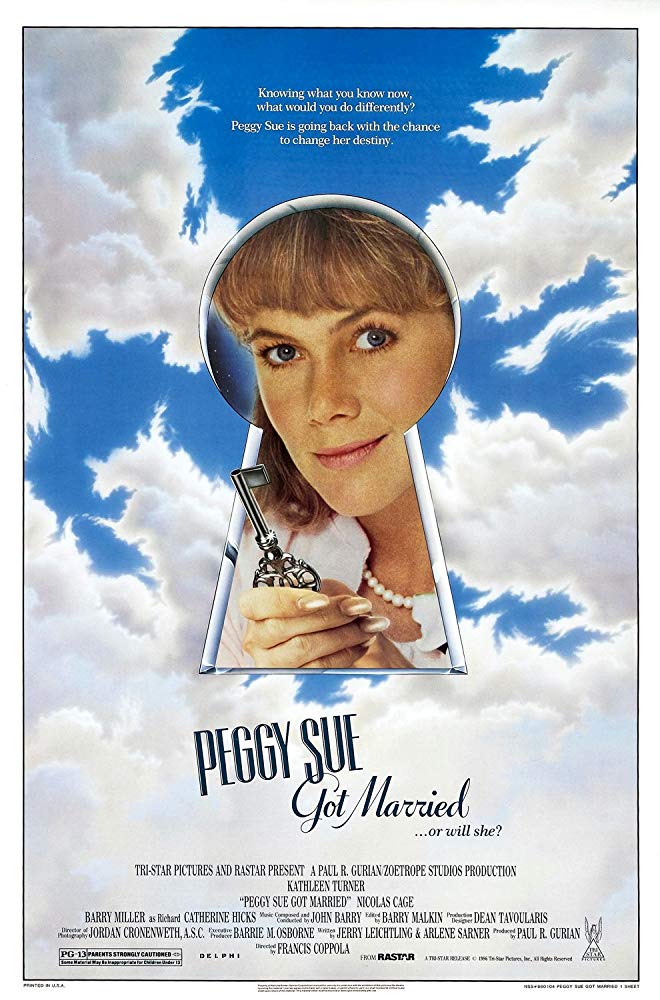 “Peggy Sue faints at a high school reunion. When she wakes up, she finds herself in her own past, just before she finished school.” -IMDB

Directed by Francis Ford Coppola (The Godfather saga,  Apocalypse Now, …), is all I need to say to most movie students like myself. He has such an incredible way with people and movies and we see that come across well in this film. They don’t make films like this often and the universe doesn’t see one like Francis Ford Coppola come along often either.

The staff is similarly charmed. Kathleen Turner plays the lead actress role of Peggy Sue. Watching her is like watching a fine work of art or a ballet dance. She is a talented actress and simply beautiful. Part of her appeal in this film is her humility that belies her beauty. She is one of those beautiful women that can pull it off.

Nicholas Cage is simply hilarious in this film as Charlie Bodell, Peggy Sue’s boyfriend. He is, by way of trivia, the cousin of the famous director. Cage does a great job as the hate-able yet love-able testosterone filled boy with a dream.  His angst mixed with Peggy Sue’s regrets makes the film an amazing message to all of us. There are other notable performance in this film

Peggy Sue somehow transports back to high school after a long bout of regret about her choices. While in this dream state (or is it?) she tries to right every wrong she did in her life. She finds out that maybe isn’t possible but that’s what makes life wonderful. It’s imperfect yet beautiful. Humans are imperfect. My favorite line is when her dad buys an Edsel and she says (in her young self body) “Oh dad, you bought an Edsel, your were always dong stuff like that.” Of course the family thinks she crazy.

FINAL THOUGHTS
We need more movies like this with a female in the lead role who takes us on a fantastic journey. I am always reminded of an important life lesson every time I watch this film. If for no reason other than the fact that it was made by Francis Ford Coppola, you should see this because it’s about the choices we make and sometime regret. Maybe we shouldn’t regret them after all. See what this inspiring film has to say. I recommend it as a perfect film in its genre. It is quite similar to Back to the Future.