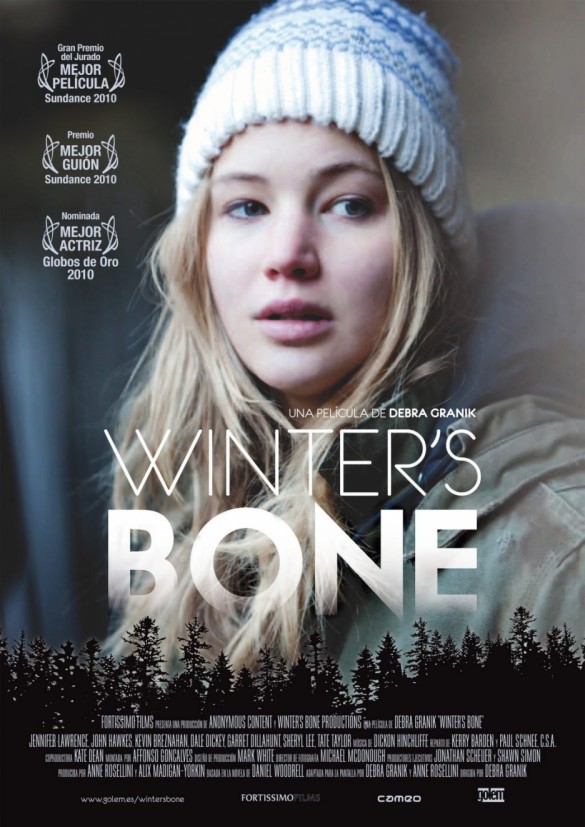 I know people living in poverty. Their income status never prevents them from doing things like picking up a banjo or making sweet tea with family. Human charms like these transcend socio-economic levels as the independent film “Winter’s Bone” reminds us. It also reminds us that rural poverty is such a sad sad thing. “Winter’s Bone” is set in the backlands of the Ozarks. It centers around 17-year-old Ree Dolly, played by then newcomer Jennifer Lawrence. She is a pretty, determined girl whose journey threatens thorny characters driven only by self-preservation. As is true of most independent films, most the actors are no-namers (though Lawrence has of course become famous in her own right since this movie). “Winter’s Bone” was directed by Debra Granik.

Ree’s mother is mentally challenged and incapacitated. This was likely brought on by a lifestyle of methamphetamine abuse. In other words, it is important to the story that we see Ree has not raised herself alone. There were at one point “greener pastures.” At one point, one of the most powerful scenes in the movies, Ree begs her mother in tears to “just this once” tell her what to do. Sadly, mother can not.

Ree has to take care of her mother along with her two siblings who seem to live in ignorance of their blight. They play and smile and jump on their trampoline with the images of abject poverty all around. Their house is a shack, but a profanely beautiful one. In the early scenes, Ree has to make do just to feed the dog with rotten leftovers in Tupperware containers. At one point, they shoot and skin squirrel. The children are priceless characters and they give the impending dark plot a sense of light relief throughout. The scenes where they play and talk with Ree are heartwarming and remind us of our humanity. Whenever Ree has to leave them, you feel tension.

Ree’s father has jumped bail. He had a long history of “cooking” meth and after a somewhat fuzzy telling of his involvement in a larger ring, we find out he is sought by the bondsman. Ree is told by him she’ll lose the house unless she produces her father, dead or alive. “I’ll find him,” is Ree’s resolute response which sets her on a mythic journey through the Ozark backlands and through her shady and fascinating relatives. She’s seeking her father to save their house.

“Winter’s Bone” is a wonderful piece of “film as literature.” It uses clever camera angles and cinematography akin to Thomas Kinkade paintings or Ansel Adams photos. It makes you feel like you are part of a family reunion and that makes you feel warm inside. Of course, at family reunions, you sometimes get an earful of shady stuff you’d rather not know. You get some of that in “Winter’s Bone”. I took it all in, the beauty along with the profane scenes.

For an excellent script, convincing characters that move you, and cinematography that will take your breath away, I recommend this movie. In fact, I agree with Roger Ebert that this is one of the best movies of 2010.

One Reply to “Winter’s Bone”