This is a film about retro tv and the way we attach to characters. We do this often to our own detriment. It’s now streaming on Netflix. 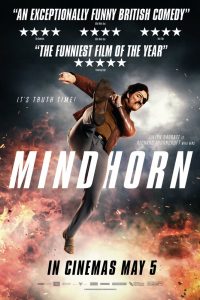 I have a hard time with some British comedy. For lack of a better explanation, I just don’t get some of it. I am sure they feel the same way about some of ours. Inside jokes that resonate with a given audience are risky when you release a film.

It’s a story of a tv action hero named “Mindhorn.” Early on in the film, a terrorist kidnapper will agree to police terms only if he speaks to the faded tv hero personally. So, we have a delusional criminal who inadvertently gets the police to resurrect this out of work actor who once played the role.

The story goes on a long time along those lines and there is a sort of twist at the end. It is certainly not original. For me, Mindhorn stated with an unfunny premise and really never became funny throughout. I can recommend it but only as background noise for blogging or other sideline activity. All else, I would avoid this one. Nothing to see here.