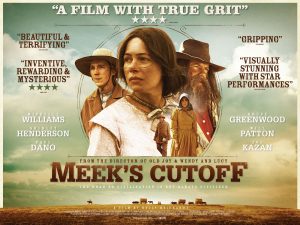 It’s great when you find a movie by a budding director because you know they haven’t sold out yet. Meek’s Cutoff is one of those movies, directed by Kelly Reichardt. This movie is close to a western but it lacks the John Wayne hero and Tombstone “shoot em up.” Because it is missing the conventions of a mainstream western, it’s tempting to write it off. On the other hand, when you look deeply into the simplicity of it, Meek’s Cutoff has a lot to say about being human. Because of that, I judge it on how well it reflects humanity in its characters and in the story. On that level, it fares well.

Michelle Williams is Emily. We see her in the first half of the movie taking orders from the men and in the latter half, all but taking control of the wagon train. Her transformation, or revelation, is important. It shows the importance of women on the trail and in mankind. Unfortunately women in 1845 were relegated to servitude and rarely took command of any larger decision-making. Who knows if they would have gone off course if Emily had the reins. Bruce Greenwood is Stephen Meek. He talks up a storm but can’t seem to deliver. The movie’s title tells us that he has some ownership of the direction they choose. For that alone he is an important character. He is ethnocentic, chauvanistic, and driven by greed. He feels like God is on his side and vice versa. It’s because of him that the Indian is tortured along the trail. If not for Emily, the Indian would have died early on in the film. I think we can all imagine the equivalent of Meek in our modern life.

Since I was an English major, I am trained to see symbols in everything. Having said that, I believe there are many symbolic elements in this film. One very strong one being the bird in the cage they are carrying with them on their journey. The bird represents the human being, wanting to escape the trappings of a cage. The keepers of the cage feed the bird and never allow it to escape. It is in essence free in its confinement. Religion is part of that confinement as is the prejudice against other races and by men against women. I hated the ending at first but later I played it back to examine it with a more open mind. I now like the way it leaves things open for the viewer. What would you do? Follow the Indian and accept the fate he has for you or go down your own path as an ignorant and starving person held by convention? Because this film portrays humanity accurately in a rural, quasi-western setting, I give it 5/5 stars.