This film is NOW STREAMING on Netflix! It’s part of my current series:

Please read my review to see what I think of the film. Then if you can, RT the post, and leave me a comment before you go. Thanks in advance. 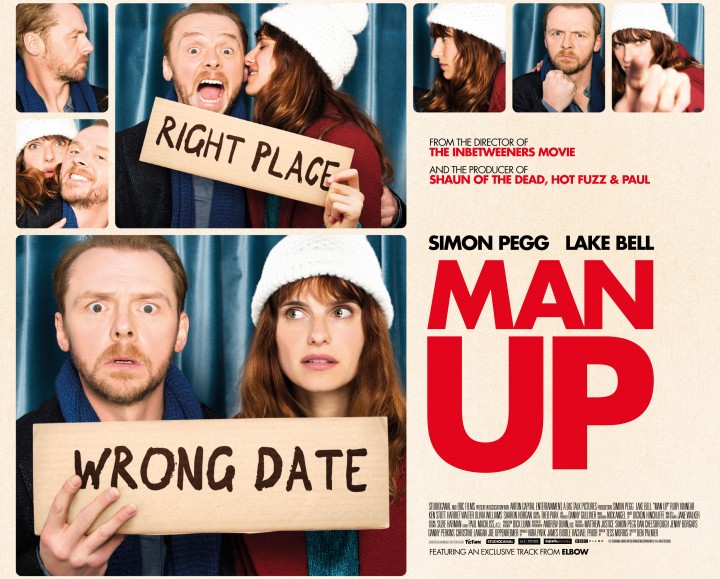 Title: Man Up
Genre: Comedy, Drama, Romance
MPAA Rating: R
Year: 2015
Director: Ben Palmer. Known for: “The In Betweeners.”
Top Billed Cast: Simon Pegg, known well for “Shaun of the Dead” and many more films, Lake Bell, known for “In a World,” and Olivia Williams, known for “An Education” and “The Sixth Sense.”
Brief Synopsis: Jack makes plans with an online dating interest to meet in person. Plans are fuddled and a different girl, Nancy, impersonates the online dating woman in the rendezvous. What results is the comedy and drama of the film.
My Word to the Wise: Simon Pegg has become synonymous with award-worthy British humor. There’s enough of that along with romantic comedy that at times, despite questionable casting chemistry, does actually work. This is a fun date movie to be sure but don’t expect something amazing.

The rest of this review may contain spoilers.

Simon Pegg has become a powerful presence in films. I found myself questioning if a character played by Lake Bell would in real life have interest a character played by the lead actor. We come to find that despite her youthful age and vivacity, Lake Bell’s character is in fact a bit dishonest and as a result unlikeable. The question in my mind was whether this goofy big brother-type could be the love interest of the girl.

There’s a lot of romantic comedy material in this: the all night bar hop, the visiting the parents, etc. For that reason, it had my wife interested. I’d say the ast 1/3 disappointed me. It didn’t wrap up the way it started. Still, no rom com films have perfect plots, we just need them to snuggle and such. This one’s definitely a good snuggle film. Because the writing as a bit unfocused, especially at the end, it lost posts with me as a romantic comedy. As a drama, I’d say it fails substantially more. Dramas have to seem real, rom coms don’t.