Revenge at its pinnacle. Starts out a bit tedious but once the ride begins, hang on, strap in, whatever because it doesn’t stop. 10/10. Rent it on Amazon in SD for $2.99. 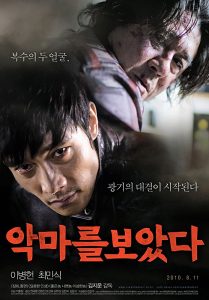 Director Jee-woon Kim list of films I will make sure and see them all. How many have you seen?