The seeds of this story were sown with Blade Runner and the Matrix. I don’t know if the creator knows that or not but they were. Androids do indeed dream of electric sheep and I know I may after watching this visual candy parlor for the eyes the past couple hours. 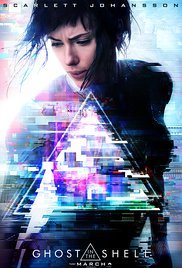 Ghost in the Shell
“In the near future, Major is the first of her kind: A human saved from a terrible crash, who is cyber-enhanced to be a perfect soldier devoted to stopping the world’s most dangerous criminals.” -IMDB
Cast
Scarlett Johansson Major
Pilou Asbæk Batou
Takeshi Kitano (as ‘Beat’ Takeshi Kitano) Aramaki
Juliette Binoche Dr. Ouelet
Directed by
Rupert Sanders
Written by
Shirow Masamune (based on the comic “The Ghost in the Shell” by), Jamie Moss(screenplay) …
Other Info
Action, Crime, Drama, Mystery, Sci-Fi, Thriller
PG-13
Fri 31 Mar 2017 UTC
107min
IMDB Rating: 6.9

This film is also a child of the Matrix. Johansson does a pristine job as the heroine. I’ve never read the comics but I feel so lucky the director saw fit to adapt them into this amazing sci-fi action film of 2017.

I love everything about this film: the special effects, the look of the city with it’s giant hologram advertisements. Though it started slow in the first 1/4, it picked up and became an insane ride I didn’t want to get off. Think of our bodies as shells encasing our brains, maybe we all can identify with being a “ghost in a shell.”

FINAL THOUGHTS
The concept of finding your purpose radiates from this film. Young people will be drawn to it because they are doing just that in their young lives. All humans will relate wth the loss suffered by the mother and the quest of “Major” (Johanssen) to regain her memory and set out on her mission, whatever that is. I found it entertaining and inspiring and recommend to anyone, though children below 13 may find it hard to understand. They will likely still enjoy the incredible colorful world created through special effects.