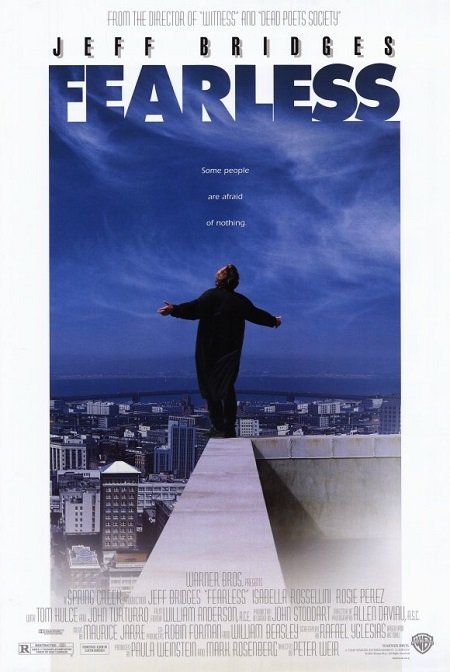 This film was directed by Peter Weir. He’s a master of directors having created one of my favorite films of all time Dead Poets Society. He also directed the Truman Show. Both of these films are like Fearless in that they are visionary, unique, character-driven, and deep in scope. This is probably my least favorite of the three but it still fares well as a film to make you think about fear, why we have it, and what life would be like if it vanished.

Jeff Bridges plays a role very similar to his in The Fisher King. He’s a man undergoing a change of perception. Before the plane crash, he is a family man in love with his wife played by Isabella Rosellini. He is allergic to strawberries. After the crash he survives, he seems fearless and it has even affected his physiology, he can eat strawberries. Rosie Perez plays a character who was on the flight as well an her child died. Bridges falls in love with her but not in a sexual romantic way, more like a savior. They both share this delusion.

The change he undergoes is intense to watch. I’m not sure if he is better off at the end, you’ll have to decide. Feel free to share your opinion in the comments. Jon Turturro has a marginal role as the airline’s therapist, paid to watch over Jeff Bridges in hopes of preventing PR damage. He does an ok job. I’d say it’s nothing stacked up against his work of The Night Of.