Listen to me read this post at my podcast The DRP. 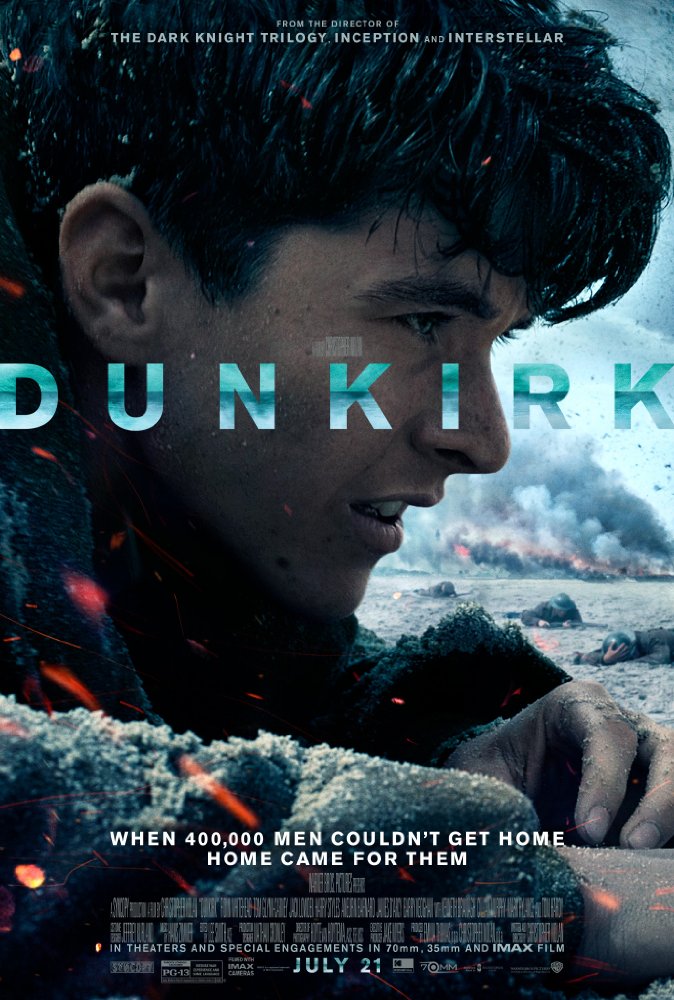 This film shines a light on the bravery and brotherhood of England through the plight of the evacuation of the beach at Dunkirk. 400,000 troops were stranded on that beach and the country’s civilian boatsmen and other resources came together to get them home. There is a strong sense of partiotism on the part of the British, as an American, I found myself proud to know some Brits. The film doesn’t attempt to bring in other countries in its intended patriotism because it’s British history plain and simple. I for one enjoyed the story but I can see how some may be put off by it, especially any French in the audience. The French character is not held in high esteem. This IS offset a bit at the end when Kenneth Branagh’s character, a British general, says he will stay until the French are safely evacuated.

Director Christopher Nolan has carved his name in Hollywood with films like The Dark Knight and Inception. I don’t feel the need to list all twenty something of his films here, they are likely to be common knowledge with a movie reviewing audience. He has set himself apart as a master of visuals. I have not found his characters to equal that. The reason that’s okay is because of the type of films he makes. They are not developed with colorful and/or deep characters. He tells a story through visuals and effects. His camera angles and panoramas are also second to none. He is often compared to Stanley Kubrick this way. I would agree but in the same breath I would say that Dunkirk is not the film that stands as his “Magnum Opus” as many reviewers are saying. It has very little depth in the way of character development. It’s like a game board in the game of war and the pieces are shown up close. Unfortunately we don’t ever get to see what they are thinking on that war board. Visually, this work is stunning, as a universal window into what happened to those men, it comes up short. I imagine Brits will argue it’s simply a snapshot of an event and because they are proud of it, it is done well. On the other hand, I feel it could have been done better if we had a lens character like Schindler or Private Ryan that helped us interpret what was happening then mentally and in the personal relationships.

There isn’t much to note in the cast. It is a cast of thousands though, I will say that. It has a lot of recognizable superstar faces. Unfortunately, none of those it greatly developed. I do like the Tom Hardy sub-plot, there is some development there. Mark Rylance also delivers a stunning performance as one of the boater rescuers. Personally, I would have liked a few side stories and people in them to be developed more. I think that would have helped me on the “ride” that is this film. We are set among the soldiers in graphic and breathtaking ways but we seldom get inside their heads and hearts which I think is the key to telling a difficult and graphic story. I think some people will find the movie boring because it looks like really cool plane fights and such but is without identification with the human struggle here. The teenage and early 20-somethings are buying tickets to see Harry Stiles, the former One Direction boy band singer. He’s had plenty of success since the boy band and now he can add being in a successful Christopher Nolan film. I’m curious what those young people actually thought of the film. Stiles himself has more lines than most. One I recall vividly was when he exits the rescue boat and says, “That man didn’t even look us in the eye.” When in fact, they man was blind. I didn’t really understand the significance of this except to show the ornery youthful attitude of characters in the war like Stiles was portraying. There are no long lines. In fact, I think the Churchill quote at the top of my review is the longest running set of sentences in the film. I do question why it was directed that way. I wanted more human connection, more of a script. Again, the visuals were incredible but I wanted to get at the heart of what was happening.

It is non-linear in its telling, which I hate. I don’t like it in novels and certainly not in films. I like things explained with subtitles like: “2 days earlier.” We are not given those so it is a bit of a chore figuring out which ship is sinking and is it that ship that is now sailing with the oily chaps aboard, clean? This is a personal preference. If you like war movies, this is a must see. I recently saw Spielberg’s Saving Private Ryan which is very graphic and I can say this one is not as bad at that but the excitement and tender human parts are similar. They both demonstrate the good humans can do even in the throes of evil war. I was a bit underwhelmed here. For fans of Nolan’s work, I recommend it of course, his camera work is incredible. You’ll never see a better war visually on screen. It’s a generally good story, based on true events which I know audiences tend to enjoy so I give it a good recommendation to you. More memorable characters and the development of those characters would have made it much better for me. People with British patriotism and a true affinity for Nolan’s work will not be disappointed. My hope is for a better one from Nolan in his next film.