Weird things are just simple things you don’t understand yet. For many, this film appears weird but I would argue it’s not quite as weird once you have a little research under your belt and of course, you actually sit down and watch it, credits to credits. If you have done those things, I’ll bet it’s less weird for you. Am I right? 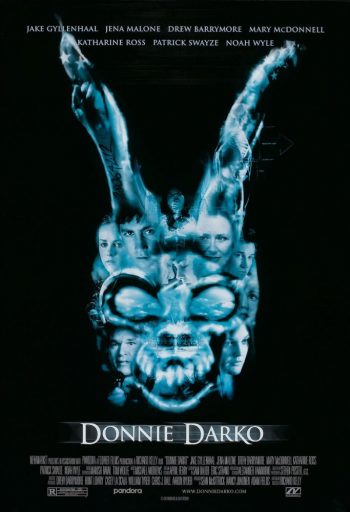 Jake Gyllenhaal plays this evil-eyed high school kid very well. He is haunted by this vision of an evil bunny. The research I alluded to in my introduction will tell you what that’s all about as well as how he cheats death in the beginning of the film. After that, he is unwittingly on a journey to understand the bunny and his own mental health issues.

Donnie is seeing a therapist. She increases his medication which seemingly should make the evil bunny go away but it does not. We can only reason from that he is not a hallucination. When we start understanding more about this creepy bunny, the film takes a strange Ray Bradbury-like turn and if you can follow this as a sci-fi film, the creepy turns to sensibility.

Now don’t get me wrong, I am not saying this film s simple ir that most viewers will “get it.” I am saying, just like Bird Man, you can read many interpretations into this. It has multiple meanings and all can be successfully argued.

I think I can safely say you will not understand this film without reading something about it on the internet. I’ve read quite a few lengthy posts about it. The general idea put forth is that there are 2 realities: the real life one and some other-worldly dimension. I’ll let you chew on that and see if you agree once you see it. I think the ending is great, it shows Donnie to have the capability of being self-less. Incidentally there are a lot of great names in this film. You have some great actors giving excellent performances. In my closing words I would just reiterate that this film is not weird. I would encourage interested parties to look around at some interpretations online and then make your own. I do wish more was explained but that’s my only criticism. I recommend this one to ’80’s movie’ fans, sci-fi geeks, and dark movie fans.