Codependency in relationships, jealousy from childhood friends, the empowerment of women, alcoholism, and Japanese monster movies, these are what the film Colossal works with as its palette. It is definitely a unique way of presenting these tried and true, effective themes in a movie. The writer/director relates them all together to make his statement in a convincing and effective way. 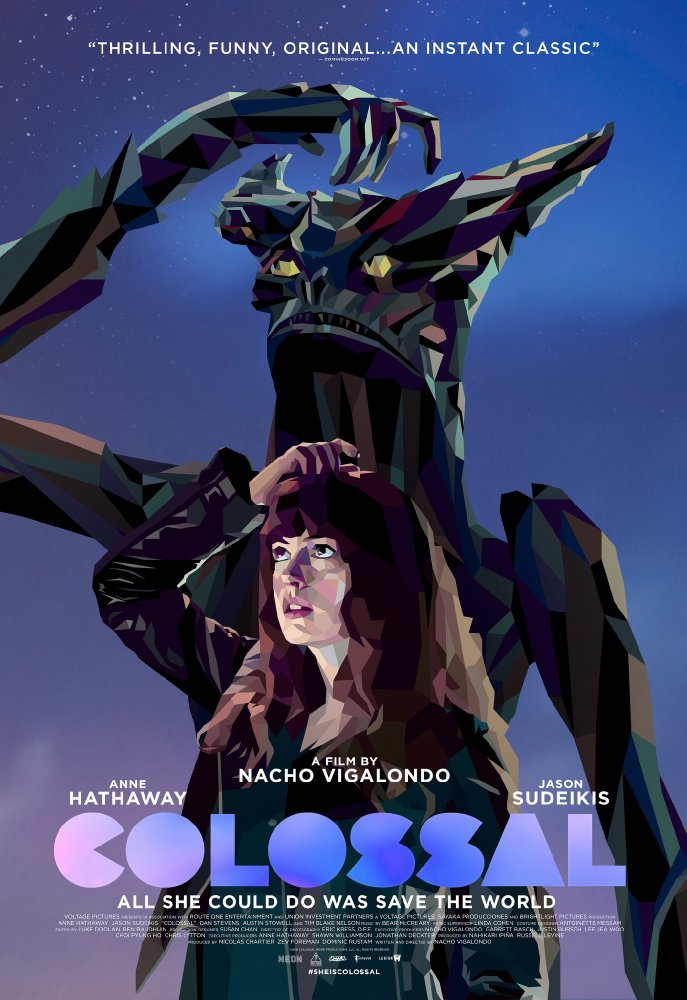 Gloria is an out-of-work party girl forced to leave her life in New York City, and move back home. When reports surface that a giant creature is destroying Seoul, she gradually comes to the realization that she is somehow connected to this phenomenon.
Director: Nacho Vigalondo
Writer: Nacho Vigalondo
Stars: Anne Hathaway, Jason Sudeikis, Austin Stowell

Writing and directing here is Nacho Vigalondo. He is a Spanish actor/director/writer born in 1977 with 21 directing credits to his name. The only really large scale American film is this one but he did direct a V / H / S sequel (oh my). At any rate, I get the feeling he may be better at the feel of Spanish culture movie than an American one. There are times the bar seems unreal and non-relatable. Beyond that, you have the two themes of Japanese monster movie culture and a city park in America at play and I’m not sure if he was mimicking rather than calling upon first-hand experiences. I will be looking for something more amazing from him in the future because I like horror and I like quirky yet visionary story-lines like this one.

Anne Hathaway does a pretty good job in this, though I found her at times to be “playing” an alcoholic rather than being damaged as one in real life. Maybe a grittier actress would have worked better. She does a good job however as a voice for women who are abused emotionally and physically in relationships which helps the strange metaphor of this film across to make a statement. I like her in everything she does, I just question the megastar being cast in a film such as this. She seems to pampered and that gets in the way for the message here I think. Jason Sudeikis is truly scary in this which is weird. He’s always such a buffoon. I think his childhood role and the adult bar owner role fit together seamlessly. It was interesting seeing him in a serious role and he worked with the story.

The story here is that a woman, recently out of an abusive relationship, winds up somehow back in her small hometown where she discovers an old friend and some strange happenings. Namely, when she drinks heavily and blacks out, her actions seem to be in exact parallel to a real life Godzilla-type monster in Seoul Korea. She sees the damage on CNN. Through trial and error she finds ways to avoid innocent bloodshed but her bar owning lifelong friend wants to show that he is pretty colossal as well and gets access to the same power.Like many metaphorical films, it ends open. We must decide for ourselves what really happened here. That left me feeling a bot cheated but also challenged to come up with my own meanings and conclusions which I think is the director’s intent. If you want a simple, thinking movie to talk about afterward with a good friend, this one’s for you. It isn’t horror or monster though, be forewarned. More of a drama about the abuse women suffer from men an how alcoholism is used as a crutch to avoid making something out of your life. Don’t expect monsters but rather an artsy, interesting film.

You can rent or buy this title now streaming on Amazon Video.