I first watched this film because I considered it to be a “weird” film, and I was doing a series on those. After watching, I don’t think it’s necessarily in that category. It is complex and the plot contains a total of 9 stories but there isn’t anything weird about it per se. I found it to be quite inspiring. Unfortunately, it is far too long at 3 hours and I think the message could have been sent in a lot less time. There is a lot there worth seeing though. 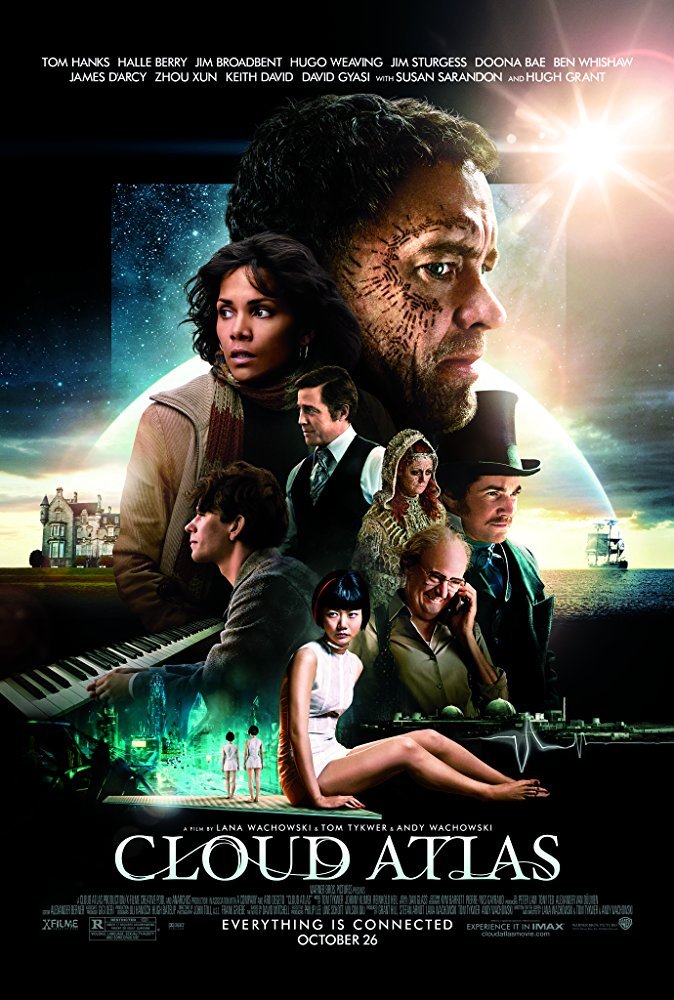 Cloud Atlas is a movie starring Tom Hanks, Halle Berry, and Hugh Grant. An exploration of how the actions of individual lives impact one another in the past, present and future, as one soul is shaped from a killer into a hero, and an act of kindness ripples across centuries to inspire a revolution.
Directors: Tom Tykwer, Lana Wachowski | 1 more credit »
Writers: David Mitchell (novel), Lana Wachowski (written for the screen by) | 3 more credits »
Stars: Tom Hanks, Halle Berry, Hugh Grant

The directors here are the Wachowski brothers, from “the Matrix” and Tom Tykwer who I have not heard of but it appears he makes German films. Their influence is what you’d expect: sci-fi, flying camera angles, and most of all: fantasy imagery.

People smarter and more into this than me have already weighed in on the internet. A simple title search will give you plenty f details about the film. I myself was not that into it at 3 hours. I found it hard to stay focused and the payoff for me was only slightly worth the time spent. If you want a visual landscape to sink into and relax, this one could fill the bill. As your standard beginning middle end 90-100 minute movie, I think it fails. Then again, I don’t think it’s trying to be standard. I kind of think it would have been better if it did.

“We are all connected” is the main idea. Breaking out of man made conventions is the secondary one. Then there is a journey into reincarnation which I found interesting. Unfortunately, that is never really developed to where the many incarnations of actors are explained. It’s a trip and a great visual fest to trip out on. AND, it has a good message. I think everyone should see it once. I think I would enjoy it more a second time, but I just don’t want to spend 3 hours on that enough. 7/10.