National Lampoon’s made several side-splittingly funny films in the 70’s and 80’s. The Vacation movies come to mind right away. They had an air of burlesque and debauchery that made mothers shield their young son’s eyes. Still, those same mothers got drunk and laughed at the same bits when they had a babysitter. 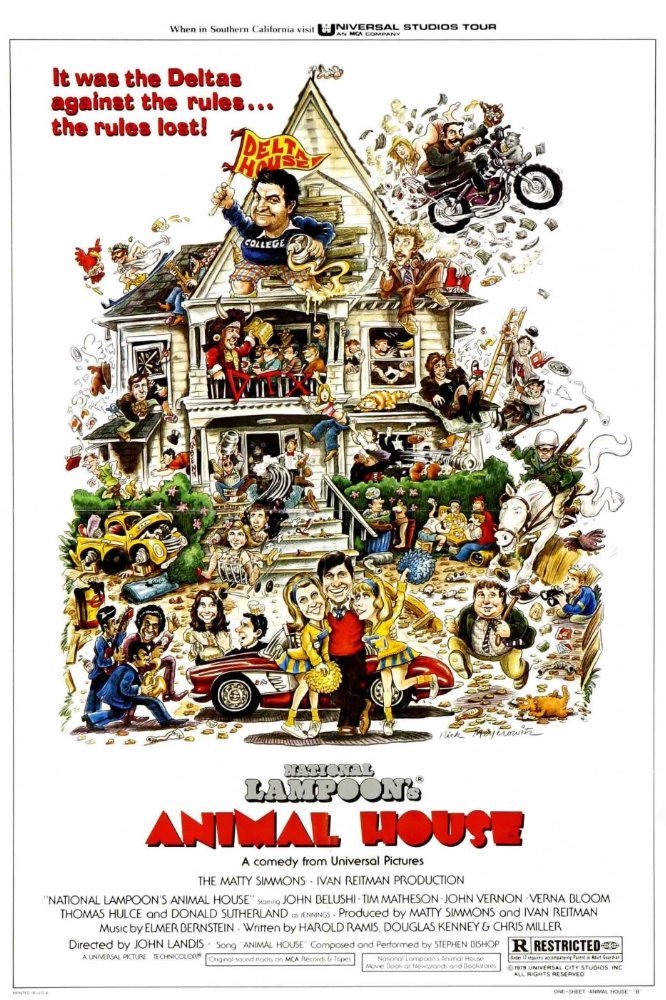 “At a 1962 college, Dean Vernon Wormer is determined to expel the entire Delta Tau Chi Fraternity, but those trouble-makers have other plans for him.” -IMDB

Animal House is a legendary comedy with short jokes over and over inside a mediocre story. Then again, the story is good enough and certainly all you need to laugh your ass off watching this film. Director John Landis is a household word as a director. He did American Werewolf in London, one of my Great 100 Films, and Twilight Zone the Movie which is a hidden gem that must be seen. He also directed the amazing comedies: Trading Places and Three Amigos. All these films are masterpieces. Landis did a great job with this film once again bringing out the “worst” in his actors and in doing so producing their best together.

There is a cast of thousands here and among the top actors is the late John Belushi. He is an absolute buffoon but in an ingenious way. Every bit he does has the audience laughing and wanting more. Other now-big names Kevin Bacon and Karen Allen and there are many many other amazing comedic actors.

The premise is watching a shoestring frat house that parties constantly try and keep their charter. The escapades they engage in are hilarious. In the end you’ll have to watch to see whether they make it or are banished from the University.

FINAL THOUGHTS
There’s some nudity here which I never mind and just the right amount of raunchy comedy. The characters are very likable and you really want to see these underdogs make it. They certainly don’t study which I of course don’t recommend because you’ll never graduate. Still, I watch this film vicariously experiencing a “what if.” What if I was in Animal House? It’s not such a bad fantasy! To me, this is an example of a perfect comedy! That’s why I give it a perfect score!