Long before Hailee Steinfeld wowed audiences in “Edge of Seventeen,” she played this role of the teenage girl in “True Grit.” It was a great casting choice since she has the same sassy attitude as the girl in the original. She works perfectly alongside Jeff Bridges who definitely takes the original role of Rooster Cogburn and gives John Wayne a run for his money. This remake is a lot of fun. 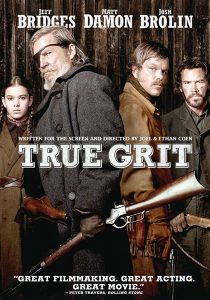 The directing duo here, Ethan and Joel Coen, are a dynamo and probably need no introduction. They took on a huge undertaking with this remake and in most ways pulled it off. They inject a humor into their films that starts to feel familiar the more of their movies you see. It is here but the general vibe of the film seems to be in effort to bring the original “True Grit” to a modern audience.

Watching the film, it was like the remake of a sing note for note. The only differences were the drunken growling style of Bridges voice contrasted against the nasally, self-assured voice of John Wayne. Josh Brolin and Matt Damon really didn’t add much to the roles they played either. I think in reflection, I enjoyed the original immensely and also the remake but not enough to really justify them making it. The Cohen Brothers are original dudes. They shouldn’t attempt to copy a masterpiece unless they are going to put their own changes into it.