“It’s just our family now. We can do whatever we want.”

10 Cloverfield is another point of view of the same situation. A woman is in a terrible car crash and wakes up in the bunker of a doomsday prepper. She thinks escape is what she wants but she has yet to find out what is actually going on outside. Minor plot spoilers ahead. 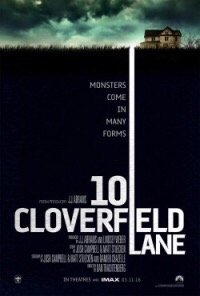 The imprisonment of someone against their will and without cause is a horrid crime. John Goodman plays Howard, the captor. Michelle is the captive and she does an amazing job acting in this film. We relate with her in her plight. Like the recent film “Room” we feel as if we are in the room with her. But I want to let you know that while a confinement theme seemed boring to me at first, there is much more going on in this thriller.

Emmett is another hapless inhabitant of Howard’s shelter. It’s underground and solid. Howard sought refuge with Howard when the disaster started happening. We aren’t told what that disaster is until later in the film. This is a mystery and half the fun is figuring out what the next part of the story is at every turn.

There’s a lot of talk on the internet about whether this is a sequel to “Cloverfield” (2008). I’ve come to my conclusions and I’ll leave it at that. I will say that I don’t think I would have enjoyed this movie as much if I knew the answer to that question so I recommend going in innocent. After you see it, you can look it up to your hearts content. Without giving you an answer, I’ll say these are two completely different movie in theme, style, and genre.

My favorite part of this movie is the character of Michelle. She makes the movie great. Second is John Goodman. If you can get over your menta block of seeing him as Dan Connor, you’ll see a serious, solid, scary, intuitive performance from him. He’s no happy-go-lucky. I enjoyed this thriller beginning to end, for all the reasons I’ve mention, it gets full 5 stars from me. I highly recommend it.